Who is in charge when there is no pope? Epilogue

It has been pointed out to me, by people who are paying entirely too much attention, that I promised to explain the Defenestration of Prague but have not yet done so. Remember that consistency is the hobgoblin of little minds. Still, for the sake of the curious I will explain the incident.

There were not one but two Defenestration’s of Prague! The First Defenestration occurred on July 30, 1419. During a religious procession, an angry mob of Hussites (followers of Father Jan Huss, a precursor to Luther and Calvin) stormed the town hall of Prague where they threw a judge, the burgomaster, and thirteen members of the town council out of the window to the pavement below where they were killed by the fall or by the mob of devout religious reformers. 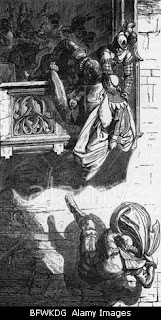 The second Defenestration was the result of the election of Ferdinand of Styria as King of Bohemia. The Protestant Bohemians wanted nothing to do with this devoutly Catholic monarch.  So, when he sent two Catholic representatives to Prague in 1618, the Protestants, in a kind of reminiscence of the good old days, pitched the ambassadors out the castle window (a height of about five or six stories). Amazingly they lived! The Catholics said that angels had softened their fall, thanks to the intercession of the Blessed Virgin Mary. The Protestants said that it was dumb luck that they landed on a pile of manure in the castle courtyard. Are the stories not irreconcilable? After all, grace builds on nature. No matter the reason, the angry Protestants failed to kill the ambassadors of the new Crown Prince Ferdinand, (soon also to be Holy Roman Emperor). They lived, but a lot of other people didn’t.

The fight soon spread to all of Europe and killed an uncountable number of people. Half of the male population of Germany died, and at least a third of the general German population, perhaps a million people. During the mayhem the Catholic villages of my maternal and paternal families were burned to the ground by the Protestant Elector, the Duke Christian of Braunschweig, home of the yummy delicacy usually called liverwurst. Perhaps that is why, as a boy, I often ate fried liverwurst, much loved in our household. Anyway, Duke Christian certainly fried a number of my ancestors.  The wars of religion raged for thirty years in central Europe, from 1618 to 1648. Simultaneously, the Huguenot and Puritan Wars ravaged France, England, and particularly Ireland, killing thousands possibly millions more. All because a couple of guys got tossed out the window in Prague. Who knew?

It is interesting to think that in the oppressive Catholic lands of Italy and Spain, dominated by medieval superstition and the terrors of the Inquisition, not a single person died as a result of the wars of religion.  In Germany, it may have been one million. In Ireland, it was about 600,000. In France, the Catholics got the upper hand and, rather than slaughter all the Protestants, they forced them to convert or leave. So, I suspect that the French death toll was less than 100,000.  The total death toll of the wars of religion was certainly more than two million.

The wars finally ended in the German states in 1648 with the peace of Westphalia. Each prince would have the right to determine the religion of those under his authority. This is called “cuius regio, eius religio” (His region, His religion). In other words, “If you live in the town or land I own, you will practice my religion,” said the duke, the count, the baron etc. The principle of freedom of religion ended in Europe with the peace of Westphalia. And the end of religious freedom meant the end of religious conversion which has ultimately resulted in the end of Christian religion in much of Europe. Religious affiliation was no longer a matter of choice, but of good citizenship.  Now it is non existent in many places.

It is easy to find pundits who rail against the Inquisition, but who rails against the disorder and death that resulted from simple and grandly defiant gestures like Luther nailing his 95 theses to the door of the Wittenberg church or the glorious Defenestrations of Prague? These appeal to us as heroic defiance in the defense of liberty. They in fact initiated a new form of government enforced religion and resulted in far more death and oppression than the Inquisition ever could have.  Still, we Americans and our modern imitators love the grand gesture.

I cannot get over the scathing criticism of Pope Benedict’s red shoes. The rumor went out that they were by Prada or Gucci! They were in fact made by a Peruvian shoemaker, by the name of Antonio Arellano, who has a small shop in the neighborhood of the Vatican. Cardinal Joseph Ratzinger used to have his old shoes repaired there. When he got a new gig as pope, he revived the custom of the red papal shoes, red being the color worn by popes before the white cassock. He simply steered a little business Antonio’s way. Benedict tried to restore the unity of Catholic history which he called the hermeneutic of continuity. He wanted to remind the world that there had been a Catholic Church long before the Second Vatican Council. The Church grows. It doesn’t change. Its expression is ever new. Although the appearance is different, the truth is eternal. The DNA is always the same, to use a modern analogy.

The world clucked its tongue led by the American media. We Americans felt so vastly superior to the luxury loving pope with the flashy shoes because we buy our shoes at cheap outlet stores, thus being somehow simpler and more noble. Look a little more closely at the red shoes. When his shoes were still black, Joe Ratzinger had his old shoes repaired by an immigrant cobbler. He made them last a little longer. We throw old shoes out and buy new.  When he needed new shoes, decent shoes for a demanding job, he paid about $200 to a worker he knew, a just wage for a decent product. We, in our simplicity, go to the mall and buy $300 sneakers made by slave laborers who get pennies on the dollar if they get anything at all. And we are superior? We are more moral? We are frauds. We are stealing from the poor of the world, but have the gall to criticize a man who pays a fair wage to a free worker. We love the gesture, not the truth.

The pundits of the entertainment world  critique the old men who run the church as they pretend to be philanthropists. In reality, they do no more than let crumbs from their tables fall to the poor and feel noble for doing so. And we are foolish enough to think them sincere. We love the gesture, not the truth. C.S. Lewis in his masterpiece the “Screwtape Letters,” has the demon Screwtape remind his nephew that “the Enemy (God) wants men to be humble, or charitable or to be forgiving. We, the demons want them to feel humble, to feel charitable, to feel forgiving.”

We moderns don’t believe that something is real if we don’t feel it. A Mother Teresa, or a Joseph Ratzinger, or for that matter, a Christ on Calvary who begged His Heavenly Father to let Him off the hook, have no place in our shallow sentimental culture. Because we love the gesture, not the truth,  Cardinal Ratzinger’s repaired shoes, Mother Teresa’s service in the midst of dryness and the nails in Christ’s hand were no gesture. They were truth.  Our new pope is being lionized by the media for what they perceive as humility. If, heaven forfend, his humility turns out to be more than a gesture, I have no doubt that they will turn on him, and would throw him out a window if they could. The grand gesture has caused more suffering and human misery than can be imagined.

The truth and only the truth will set you free.