Is Rabbi Lefkowitz for real?

Dear Rev. Know-it-all,
You talk about your friend, Rabbi Lefkowitz a lot. Does he really exist or is he just a fig newton of your imagination?
Yours,
Harold “Hal” U. Sinayshun
Dear “Hal,”
There really is a Rabbi Lefkowitz. You couldn’t make him up no matter how hard you tried.  I met the rabbi years ago when I worked in a very tough part of town. He and his small congregation were trying to revive a synagogue just a couple blocks north of the church where I was pastor. Every Friday night the rabbi and his sons would walk past the church on their way to Friday evening services. I am very German-American (I did one of those gene tests. It turns out that I am completely German except for 3% Neanderthal and one three-hundredth East Asian. I am not making this up. However, I was raised in a home that though Catholic, was very aware about things Jewish because of my father’s work, so every Friday I would exchange a Shabbat shalom with the Rabbi to which he would respond “Gut shabbas, Father.” So began a friendship. 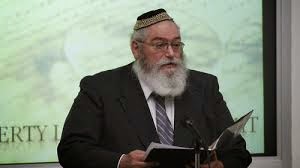