The Wonderful World of Words - part 7

Liturgy. Here is another fancy word that people started using back in the 1960’s. We were taught all about liturgy. We had liturgy committees and liturgy planners and liturgists and para-liturgies and lots of other permutations of the word. Priests dare not say Mass without first consulting the liturgy committee. When I was in seminary we had something called the “theme liturgy.” Liturgy planners would ask, “What is the theme of the liturgy today?” I remember an old ordained curmudgeon who when asked that question said, “The theme of the liturgy today is the saving death of Jesus on the cross.” The liturgists didn’t get it. The world sprouted gloriously with home-brewed liturgists who had taken a course or two on “liturgy” which gave them the right to intervene in anything father was about to do. It was no longer enough to “say Mass.”


To simply “say Mass” showed an entire lack of creativity. Unless one prepared a theme and its unfolding by means of a number of exceedingly boring meetings, one was simply going through the motions. During Lent and Advent back at Bathsheba Bible College where I attended St. Dymphna’s college seminary, each dorm was assigned to choose and execute a theme for the liturgy of the day, Morning Prayer, noon Mass – excuse me Noon Eucharistic Liturgy – and Evening prayer. Once evening prayer consisted solely in the playing of the recorded sound track of the Wizard of Oz.

That however was not the low point. That occurred at Morning Prayer a few weeks later. There we were about 300 sleepy adolescents gathered in chapel at 8 AM, when we heard the roar of an engine in the back of chapel and one of the liturgy planners did a wheelie on his motorcycle up the main aisle. The theme of the liturgy was the movie Easy Rider. You see the movies, we were taught, were 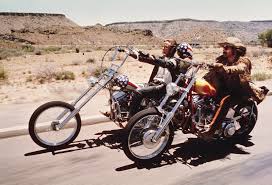 full of Christ figures and Easy Rider represented Christ the counter-cultural rebel, killed by those who just didn’t understand “groovieness.”  That was to the best of my memory the last time we had Evening or Morning Prayer in the seminary.


I was taught that liturgy is a Greek word that means the “work of the people”.  We were the people and we could do whatever the blazes we wanted to express ourselves at the community gathering – that is the LITURGY.  Liturgy after all means the work of the people.


This is not exactly true. During religious festivals in pre-Christian Greece, a wealthy citizen or a group of people might fund a religious drama. These were not simply morality plays, but a true calling up of the stories of the gods and the heroes of old. They were profoundly religious and had all the aura of a religious service in which the ancient Greeks could enter into the sacred world that had founded their cities and culture. Because they were sponsored by private citizens they were called a public (leito-) work (ergon). This is a bit different than the work of the people (tou laou in Greek.)

In the grand old days of the sixties we decided that since the liturgy was the work of the people we could do whatever we wanted to it. It was ours, not theirs. Power to the people, brother!  (Oops! and sister) Ah, the sixties! How I wish could remember them.

A public work is quite different than the people’s work. A public work belongs to a whole community, and not to a small segment of it. Mass is the work of the whole Church – past, present and future – spread out through the world and through the ages. I cannot simply change what belongs to a whole community just because I think my particular spin is better than everyone else’s. The Mass is not my property. I belong to the Mass, especially if I am ordained as bishop, priest or deacon. We are the servants of the people, not its owners. So the next time someone who has taken a course in liturgy tells you that liturgy means the work of the people, you can say, “Well, that’s not quite true.

Trust me. You will feel gloriously smug.
Posted by Rev. Know-it-all at 12:00 AM