The Rev. Know-it-all’s Guide to the Holy Land, part 4 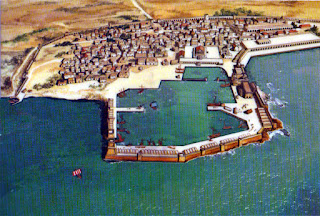 Caesarea Marittima is of incalculable importance in the history of the world and of Christianity. Herod who professed to be a Jew, built a city dedicated to Greek gods and to the divine Emperor, Augustus. It was the major port of an area that had no ports to speak of. The Jewish world looked east to Babylon, but Herod used that most amazing invention of the Romans, concrete that hardened underwater, to build one of the most impressive ports in the Mediterranean world. It was like a nail that held the Holy Land to the west. To get to Aramaic-speaking Babylon with its large Jewish community one had to travel for months across a dangerous semi-desert landscape. To get to Rome and Greece one got on a nice ship at Caesarea and if the winds were right, in a few pleasant weeks one was in Athens or Rome.

Caesarea aimed the message of Christ to a cosmopolitan world where it flourished. Peter and Paul went west. The Gospels were written in Greek, the common language of the west. Herod thought he was pleasing the Roman upstart generalissimo. He was creating a springboard for the Gospel of Christ. We read in the Acts of the Apostles that Philip the Deacon brought Christianity to Caesarea. St Paul enjoyed the hospitality of Philip the Deacon’s home.  St. Peter came to Caesarea from the smaller southern port of Joppa down the coast after having had a vision to baptize Cornelius the Centurion and his household. It was in Caesarea that the first non-Jewish Christians were baptized. Remember that Cornelius was part of the Roman government and that he and his slaves were Greek-speakers. When the new convert Paul about was about to be killed in Jerusalem, the leaders of the Church brought him to Caesarea, sent him home to Tarsus, waved him off at the dock which is still there. I’m sure they shouted “Bon voyage! Don’t call us. We’ll call you!”

Paul's first missionary journey left from Caesarea and he visited Caesarea numerous times between missionary journeys. He was a prisoner there for two years before being shipped off to Rome to be tried before the emperor. St. Paul is buried in Rome as is St. Peter, but they got there by way of Caesarea. I imagine that Caesarea was their last glimpse of the Holy Land where they had met Christ and had seen Him risen from the dead.

Early Christian traditions hold that the first Bishop of Caesarea was Zacchaeus the Tax collector, and that at one point Cornelius the Centurion was a bishop of Caesarea. It could be true. They both worked for the Roman government and the Roman government was headquartered in Caesarea, not Jerusalem. Great Christian scholars like Origen and Pamphilus made Caesarea their home. The theological school of Caesarea was home to largest Christian library of the time, having 30,000 manuscripts: Gregory Nazianzus, Basil the Great and Jerome all studied in Caesarea. It is even possible that the first drafts of the Nicene Creed were written in Caesarea! (At least the great bishop historian Eusebius of Caesarea seemed to think that).

When you see Caesarea, you are seeing the springboard of Christianity. Caesarea flourished as the capital of a Byzantine Christian Holy Land for another 600 years. Invaders from the east conquered and devastated it in 614, and again in 640 when it was captured by the troops of Muawiyah I. The harbor was allowed to silt up and it was unusable by the around the year 800. The crusaders took the city in 1101. It was revived as fortress and harbor. Saladin captured the city in 1187; the Crusaders took it back in 1191. The Mamelukes finally captured it in 1265. They destroyed it completely so that it could never be used as a port again. They did the same to all Crusader coastal cities and harbors. Once again, the Holy Land turned east and its towns withered into underpopulated ruins on the edge of the desert. Around the year 1500, Jerusalem herself had shrunk to the size of a large village of around 5,000 inhabitants. It remained a shabby backwater off the beaten path until more modern times.