The Rev. Know-it-all’s Guide to the Holy Land, part 14


Continued from last week.
Let’s move on to another golden dome, at least one that used to be golden, the Church of the Holy Sepulcher, or as the Greeks call it, the Church of the Resurrection. As I’ve already told you, Jesus was crucified in a quarry right outside the main west gate of Jerusalem and the Scriptures tell us that there were tombs in that place. A wealthy follower of Jesus, Joseph of Arimathea, had a new tomb there that he offered for the quick burial of Jesus. It was about to be Sabbath, and Passover as well. On Easter Sunday morning the tomb was empty for the entire world to see. Christians seemed to have venerated this well-known spot for the next century. Jerusalem was destroyed, and the Jerusalem Temple burned to the ground about forty years later well within the life time of the first Christians of Jerusalem. The city was not completely depopulated and there seems to have been a Christian presence in the city after 70 AD.  There is some evidence of a Christian synagogue that was oriented not toward the temple, but toward the site that was to become the Church of the Holy Sepulcher.
The Judeans rebelled once again and around 130 the Roman Emperor Hadrian put down the rebellion and expelled all Jews from the ruins of Jerusalem. By this time there was a growing number of Greek Christians who would not have been expelled from the area of Jerusalem and who reasonably would have preserved the memory of the site of the resurrection. Hadrian rebuilt the entire city on Roman lines with straight streets and a central plaza, renaming it Aelia Capitolina. He built a temple dedicated to the goddess Venus and a great raised plaza squarely over the tomb of Christ and the site of Calvary. He thus inadvertently preserved the site of the tomb and the rock of Calvary.
Two hundred years later, around 326 there was a new emperor, Constantine, who was favorable to Christians. He wanted to know the location of the death and resurrection of the Lord, and Bishop Macarius of Jerusalem knew right where to go. He showed Constantine’s agents where to dig under this plaza and temple. The Christians of Jerusalem had never forgotten the site. Constantine authorized Bishop Macarius to tear down the pagan temples and begin the excavations. Over these Constantine built the greatest church of its time, the Anastasis. It was more a complex than a single building, first there was a large church called the Martyrium, or “Witness.” Past the church was an open courtyard in which stood the rock of Calvary and past that on the far side of the courtyard stood the tomb. 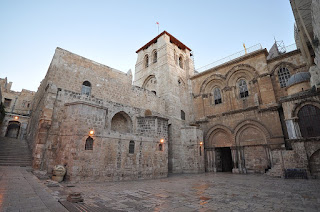 Constantine had a great love of building and flattened everything around the tomb and the rock of Calvary leaving only a cube of rock around the tomb and the bare outcropping of rock that was believed to be the place of execution. The quarry wall in which the tomb had been dug was largely levelled by the builders, leaving only the cave tomb of Jesus and a few tombs toward the west of the structure which are still visible today. He built a housing around the tomb of Christ called the Aediculum in Latin, Kouvouklion in Greek. Both mean little building in English. Eventually it was all topped off with a circular colonnaded rotunda topped by a magnificent gilded dome. The dome of the rock, built by the Caliph Abd al Malik in 691 was meant to be a restoration of the temple of Solomon and a counter balance to the magnificent structure of the Christian Holy Sepulcher on the west side of the city.
Prior to the Arab invasion of the Holy Land, the church of the Holy Sepulcher was damaged by fire in 614 by the Iranian Sassanids when Khosrau II, invaded Roman Jerusalem. the Emperor Heraclius recaptured Jerusalem from the Iranians (Persians) in 630 and repaired the church in 638. Jerusalem was captured by the Arabs a half century later but remained largely a Christian city. In 1009, the Fatimid Caliph of Cairo, Al-Hakim ordered the destruction of the church along with all Christian churches in the Holy Land and Egypt. The Caliph particularly wanted to end the miracle of the Holy Fire that occurred in the tomb of Christ every Holy Saturday and still occurs to this day. The miracle was just drawing to many Christians to the city. The destruction of the Church of the Holy Sepulcher was one of the major causes of the crusades along with the persecution of Christians and pilgrims. In 1027, the (Roman) Byzantine Emperor reached an agreement allowing the rebuilding of the church. The Byzantines were only able to rebuild the rotunda and some surrounding buildings. Most of the church remained in ruins.
The renewal of persecution caused Europe to launch the first crusade in 1099. The church you see today is essentially the Crusader church, built on the foundations of the old Constantinian church and though much damaged by fires and earthquakes over the years. It has been constantly repaired and renewed. The rotunda and the aedicule were rebuilt after a fire in 1809, one of many fires and earthquakes in its history. In modern times the dome was in bad shape, but was finally repaired by 1997. The 1809 reconstruction of the aedicule was in such bad shape that it had to be shored up with metal girders on its exterior in 1947. Repairs are slow because three different religious authorities have responsibility for the church, Greek Orthodox, Armenian Apostolic and Roman Catholic, and to a lesser degree the Coptic Orthodox, Syriac Orthodox and Ethiopians.
The Israeli government threatened to shut down the aedicule a few years back for reason of safety, so in 2016 the major parties agreed to repair the aedicule. It was quite an event! Caliph Hakim way back in 1099 had ordered the very bedrock of the tomb to be hacked away so that Christians would never be able to venerate it again. No one knew if the actual tomb was still there under all the marble. The marble covering of the tomb had been in place since at least 1555 and no one knew what was under it. It was believed that the attempt of Hakim to destroy the holiest shrine in Christendom had failed because in ruining the dome of the rotunda, the caliph had inadvertently protected the tomb itself.
On the night of October 28, 2016, the marble surface having been removed on the 26th, the original limestone burial bed was revealed intact. The tomb location has not changed since it was first uncovered by St. Helena the mother of Constantine. The original limestone cave walls and the limestone shelf on which the Savior’s body was laid still lie within the marble surface of the aedicule after two thousand years. One other interesting note: When the researchers uncovered the original limestone burial under the marble, they placed electronic measuring devices on it, the devices all malfunctioned. It was as if some unmeasurable energy still radiated from the rock of tomb. Interesting, no?
See you in Jerusalem,
the Rev. Know-it-all
P.S. I suggest you look at “Holy Sepulcher, a 3D Journey Back in Time.” If you do a web search for this video it should come up easily. It’s the best one I’ve seen. If you don’t see it, you probably won’t have a clue as to what you’re looking at when you visit the Church of the Holy Sepulcher.
Posted by Rev. Know-it-all at 12:00 AM