Who did Adam & Eve's children marry?

Dear Rev. Know it all,
I have a question from the 4th grade class that I teach. “Since God created Adam and Eve and there was no one else on earth, wouldn't their children have to have married each other?  (Insert general grumbling, 'yuck,' 'gross!', etc. from the students.)”  Whom did Adam and Eve's children marry?"
And if you wouldn't mind including, because I think it will also be asked, "By whom were they married?"
I am extremely grateful for your help.
Miss Inge Link

What do I tell my son about Santa Claus?

Dear Rev. Know it all,

Our youngest boy, Tim, will be turning twenty-three soon and we are worried that he may ask us whether or not there really is a Santa Claus. As Catholics, what do we say? We are disturbed by the increasing materialism of the Christmas season and worry on the one hand that our little boy will be swept up in current attitudes, the “Holiday Spirit,” so called. On the other hand, we worry that our baby will be disillusioned if we tell him that there is no Santa Claus. He still cherishes the hope that he will Santa Claus coming down the chimney on Christmas night and waits by the fireplace every December 24th with a baseball bat and a pair of handcuffs. It’s so cute to find him asleep there in his jammies on Christmas morning.

What should we do?

Not to worry, there is a third alternative. Somewhere between breaking the little tyke’s heart and having him continue in a deluded state of ignorant innocence, there is another alternative. There is a certain danger in allowing him to believe in a large red-suited home invader who should have died years ago from clogged arteries. Eventually he will discover that he has been duped all along, and that goes for the Tooth Fairy, the Easter Bunny, the Appendix Elf and that whole crowd. At that point he will probably make the leap to “If my parents have been lying to me all these years about someone as important as Santa Claus, perhaps they have been lying to me about God!" The loss of innocence and parental trust can be a bit unsettling, especially for one of such tender years as is your son.

I am of the opinion that parents should never lie to their children. There are a few options. I love the story that Corrie ten Boom tells in her magnificent book, “The Hiding Place.” When she was a little girl, perhaps 4 or 5, her father would often take her with him when he went to the big city to buy supplies for his watch repair business. One day, as the train rolled through the Dutch countryside, little Corrie, having heard older girls talking on the playground at school, asked her father, “Papa, what is sex?” Casper ten Boom, looked at little Corrie and silently turned to stare out the window again, leaving his daughter’s question unanswered. When the train pulled into the station, Casper asked Corrie to pick up his tool bag. She did her best but couldn’t budge the bag. Casper then said to her, “Corrie, there are some things too heavy for you to carry right now. When you are old enough, I will tell you what sex is. 'Til then, trust me.” We can always tell our children that some things are too heavy to carry now and we will tell them later. Santa Claus is not one these things, despite his girth.

As I said, I am of the opinion that parents should never lie to their children. If little Timmy asks, “Is there is a Santa Claus,” this is what I would tell him. “Yes, Timmy, there is a Santa Claus, but his real name is St. Nicholas and he doesn’t live at the North Pole, he lives in heaven with God. He doesn’t actually bring all the toys and those wonderful new pairs of sweat sox, but he was a very kind and generous bishop a long time ago, who gave gifts and helped little children. He inspires Mommy and Daddy to give gifts, and Jesus gives Mommy and Daddy the ability to give the gifts. All that stuff about elves and the North Pole is make believe, but make believe is all right and a lot of fun, if you know the truth, so you can just keep waiting for Santa by the chimney if you want to. It’s great fun”

We tell our children the dandiest things like the Tooth Fairy, the Easter Bunny and the boogey man in order to get them to do what we want. No wonder psychiatrists make a decent living. However, St. Nicholas and God are real. Perhaps you are among those who think that God is just an imaginary friend for grown-ups. I beg to differ. Jesus lived. We have more documentation about Jesus than we do for people like Julius Caesar and no one doubts that

Caesar existed. Further despite our modern pseudo-scientific skepticism, God who is unseen leaves His fingerprints everywhere. I just got a fascinating video on the latest new about the Shroud of Turin. I can hear you scientific types beginning to giggle and guffaw. Look at the issue scientifically. A flawed carbon test made on a medieval patch has convinced people who wanted to be convinced that this amazing relic is a fake. Well, read the latest. It is interesting to note that every time there is a new imaging technology, it seems that it is already built into the cloth. When Secundo Pia took a picture of the Shroud in 1898 using that relatively new-fangled technology of photography, lo and behold, the Shroud turned out to be a photographic negative. Then someone invented the VP-8 Image analyzer to interpret radio waves bouncing off distant objects. Lo and behold, when given a picture, any picture, of the Shroud, it produced a three dimensional image, something no photograph or painting had ever done. So the Shroud was shown to contain three dimensional information. Now, Dr. Petrus Soons and Dame Isabel Piczek — a Hungarian trained particle physicist, have shown that the Shroud contains holographic information. Dame Piczek says the image can only be compared to a singularity, an event horizon like a black hole!?! To believe that the thing is a medieval fraud or just an accident makes believing in Santa’s elves seems reasonable. Or how about the appearance of the Blessed Mother in Zeitoun, Egypt?. Apparently she and a few angels stood on the roof of a Church in suburban Cairo a few nights a week for about three years in the 1960's. thousands came to gawk, even Egypt’s president Gamal Abdul Nasser. (Just go to your computer and do a web search using the word “Zeitoun” Some of the websites start with the idea that such things are impossible and try to explain them away. I know people from Egypt whose families were present at the event. How about... I could go on and on. God who is bigger than the universe may be impossible to see, but He is certainly able to be known because 2000 years ago the invisible God became visible in the person of Jesus, the Jewish Messiah, and Mary who may well have wrapped Him in the Shroud when he died also wrapped Him in swaddling clothes and laid him in a manger. He remains visible in so many, many ways. He certainly lived and lives still.

As for your little gem by the fireplace, I see no harm in his waiting by the fireplace to deck Santa with a baseball bat. Perhaps, by some miracle of grace, the Lord will allow the real St. Nicholas to descend from heaven and to appear in your living room. Timmy should watch out however. There is a legend that St. Nicholas punched Arius the heretic at Council of Nicea. I doubt that it’s true, but these days one can’t be too careful.

Farewell to a wonderful priest... 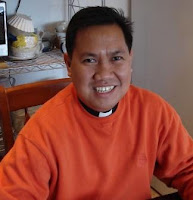 Dear Friends,
In my sadness, I hesitate to put pen to paper, (or better, finger to word processor) this week. My associate, Fr. Ron Plomillo, is returning to the Southern Philippines and I may actually have to do some work here at the parish. He is such a fine priest and such a hard worker, thus it was inevitable that his bishop would want him back. I write endless columns about the struggles of the church in the modern world and the thousands of unknown martyrs who shed their blood for Christ. He is actually going to a place where martyrdom is common. Keep Him in your prayers, and if you know Him, thank God for the privilege.
Rev. Know it all
Posted by Rev. Know-it-all at 2:00 AM No comments: