A rabbi asks a priest a question... part 9

So, after a thousand-year history, the temple was gone and Jerusalem was no more. The Romans had plowed the city under and, in around 135 AD, built a thoroughly Roman city on its ruins called Aelia Capitolina. Circumcision was forbidden in the province of Judea and those who belonged to the religion of Israel were prohibited entry to Jerusalem, though they lived undisturbed in the empire as a whole. The prohibition against Jews living in Jerusalem continued for the next five hundred years, though they were allowed to return to mourn the loss of the temple on the anniversary of its destruction, Tisha b’Av.

The emperor Hadrian thought that if you removed the center of Israelite life, the temple and the Holy City, you would end the reason for rebellion. He hadn’t bargained on the persistence of the religion of Israel in both of its remaining manifestations, the Christians and the Rabbinic Pharisees. The Pharisees were prepared for this contingency and in a certain sense they had already shifted their focus from the temple to the synagogue. They continued to live according to the laws of the Torah throughout the Roman and Persian empires.  As for the Christians, though they claimed to be Israelites, they weren’t considered as such by either the Rabbis or the Romans because, by this time, most of them were uncircumcised, thanks to the heretical theories of Paul of Tarsus.  They continued as a presence even in Aelia, formerly Jerusalem for the next two centuries despite Roman persecutions and prohibitions.

The Romans laid out a typical Roman city over the ruins of Jerusalem with a regular grid of streets. It was settled by retired Roman soldiers and became completely secular. There seems to have been a shrine to Jupiter Capitolinus on the temple mount and the main plaza of the city and a temple to the Greco Roman gods which were placed squarely over the site where Christians had claimed Jesus died and rose. The places dear to Israel and to the Christians were defiled.  But faith persists… 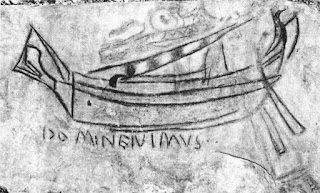 An amazing discovery was made in 1971 in the Armenian Chapel of St. Vartan underneath the present church of the Holy Sepulcher. There they found a graffito on one of the huge stones that had probably made up the retaining wall of the plaza on which Emperor Hadrian had built the temple and civic plaza dedicated to the goddess Aphrodite/Venus. On this flat stone, there is the carving of a ship in the style typical to the Mediterranean Sea of around 200 AD. It’s about 12 inches high and 26 inches in length. There are two Latin words beneath it, “Domine Ivimus” seemingly a paraphrase of Ps.122:1, which in Latin reads “In domum Domini, Ibimus,” in English “we will go unto the house of the Lord.” Instead the inscription simply says, “Lord, we have come.” (Latin: “Domine, Ivimus.”)  The change from “b” to “v” is a kind of word play that changes the future tense to the past tense, as you all know from your high school Latin classes. Psalm 122, (121 in the old Vulgate reckoning) is one of the 15 pilgrimage psalms sung by those going up to Jerusalem on pilgrimage. It seems that, despite the best efforts of the Romans the first believers in Christ never forgot Jerusalem, where their Messiah had died and risen from the dead. Neither did the Jews.

Things continued apace for the next two centuries. With the destruction of the temple and the exile of the Rabbis from Jerusalem, the break between the two groups who read the books of Moses was complete. The word Judean now pretty much meant what we mean by the word the Jew, at least until very modern times. A Judean/Jew did not worship the gods or the emperor. And unlike certain modern versions of Judaism, they lived by the laws of the Torah, both dietary and ethical and they circumcised their male children. They gathered in synagogues for the reading and study of the Torah and to share a common life of prayer and liturgy. The Levitical priesthood shrank to a memory. The Rabbis, not the priests, were now the leaders of the religious life of the community.

However, something odd happened. The numbers of Christians grew geometrically while the number of Jews shrank, despite the protected status of the Jews and the persecuted status of the Christians. According to Dr. Rodney Stark in his book of archaeological sociology The Rise of Christianity, the population of Jews in the Roman empire shrank from perhaps 8-10% of the population to 1 or 2% during these two centuries, or from perhaps seven million to possibly less than one million. These were hard centuries for everyone.

The Roman Empire was torn by plague, war and political as well as economic instability. The years were even harder on the community of Jews living in the Roman Empire. Perhaps one million of them were slaughtered in the three Jewish/Roman wars already mentioned. They suffered from the plagues and famines that beset the empire, just as everyone else, but a drop of 80 or 90% in an ethnic and religious population is rather noteworthy.

What happened? Simply put, Jews were probably less observant outside the Holy Land than in its borders, and now almost all Jews lived in the Diaspora except for those communities that continued to flourish in the area of Galilee. A Jew who was nonobservant was most probably not going to start worshipping the ridiculous gods of the Romans, Greeks and Egyptians. They could however join the Christians, who observed a kind of Sabbath and read the books of Moses.

The Christian liturgy involved bread and wine and Psalms, just as the synagogue service did, and it had the added advantage of not requiring circumcision or dietary restrictions, both of which were offensive to their Greco-Roman neighbors who didn’t enjoy being called unclean. The sociology seems to indicate that a large part, if not the majority of Jews in Roman territory became Christians during those centuries of separation and simply blended into the Greek speaking population. Though there were substantial Jewish communities in the west in places like Rome, Thessalonica and Spain, but in general there was a withering of Judaism in the west. At the same time the Jews in the Aramaic speaking east, Arabia, Iraq, Iran, flourished as did the Babylonian Jews. There, during these centuries, they began the writing of that masterpiece of rabbinic life, the Babylonian Talmud which nurtured Judaism wherever it existed.

Then in 314 AD something completely unexpected happened!

Next week: Still more history and still more weeping!
Posted by Rev. Know-it-all at 12:00 AM